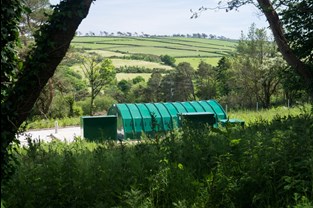 As part of the regional sewage treatment strategy several small catchments in the north of the Island now have modern sewage treatment facilities known as Integral Rotating Biological Contactors (IRBCs). An IRBC is a package sewage treatment plant; all processes for treating crude sewage are contained within one unit. Effluent is discharged to a watercourse and settled solids are drawn off at regular maintenance intervals.

The Isle of Man has IRBCs in the following catchment areas:

Bathing water quality has improved in these areas following installation of the IRBCs.

IRBCs use a natural process to treat sewage and the process is sensitive to the waste that it receives.

The IRBC is intended to operate continuously in order to maintain the purification process, which is achieved naturally. The pH of sewage is normally around neutral (6-7) and therefore requires no additions of chemicals to maintain.

Non-screened crude sewage enters the primary zone. Gross solids settle, and, via a slot in the partition wall separating this compartment from the next, the settled sewage flows into a second compartment where further settlement takes place. Primary sludge settling on the floor of each compartment and floating matter, as scum, are mostly retained in the first compartment. The effluent from the last settlement compartment then enters the biozone to come immediately into contact with the rotating discs carrying the biomass. The partially treated effluent from the first biozone stage passes through a porthole in the stage wall to the second biozone and so on through to the end of the last biozone stage.

The biozone discs support biological life/biomass, which attaches itself to the discs' surfaces. This biomass automatically builds up to a maximum density as ideal conditions prevail; food in the form of dissolved and suspended organic material in the settled sewage, and oxygenation of the biomass as the discs pass through the air before becoming immersed in the liquid flow during the complete cycle of the shaft. Biological slime continuously sheds and new life reforms to maintain the purification process.

The re-circulation facility returns the settled sludge and surface scum from the final settlement tank back into the primary zone at pre-set cycle times.