We own 7 impounding reservoirs, 4 of which are currently operational; West Baldwin, Sulby, Clypse and Kerrowdhoo. These reservoirs provide raw water to the Island's 2 water treatment works at Douglas and Sulby.

Cringle and Ballure Reservoirs are no longer used for drinking water supply and Block Eary Reservoir supplies water for hydroelectric power generation. Find out more about each reservoir below. 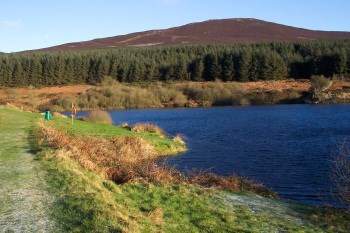 The reservoir is 245 metres at its longest point. The catchment lies to the south of Round Table and South Barrule and consists mainly of open moorland, with extensive forested areas around the margins of the reservoir. Manx slate underlies a relatively thin overburden of boulder clay over most of the catchment.

The reservoir is now used solely for recreational purposes.

Disabled anglers can now fish from a specially designed platform at Cringle Reservoir. The platform is near the disabled users' car park and can be accessed via either a low gradient ramp or steps with hand-rails.

Anglers who are registered as disabled can obtain a key to the disabled users' car park at Cringle Reservoir by contacting our Network and Client Services Team on (01624) 687687. 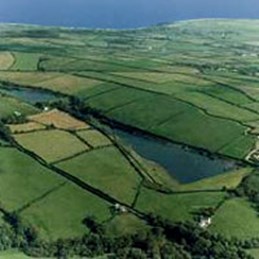 Clypse Reservoir was constructed by Douglas Waterworks Company between 1875 and 1878 to the designs and under the supervision of Daniel Cregeen, a local engineer, and is sited immediately upstream of Kerrowdhoo Reservoir. It is the upper of the two reservoirs in the valley of the Groudle River, above Onchan, and is around 320 metres long.

The dam is an earth fill embankment with a concrete core wall. The upper part of the upstream face of the embankment is protected from wave action by carefully placed stone pitching. The downstream face is predominantly covered by grass but with areas of bracken and brambles.

Kerrowdhoo Reservoir was constructed between 1891 and 1893 and is the lower of the two reservoirs in the valley of the Groudle River and is about 520 metres long.

Following completion of the Kerrowdhoo Reservoir, the normal mode of operation of Clypse Reservoir became to feed water down into the new lower reservoir. The reservoirs supply raw water to Douglas Water Treatment Works. 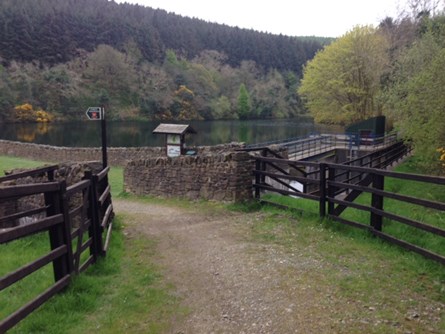 In its early years the Ramsey Water Works Company built two concrete walled reservoirs designed to capture and store water flowing down the Ballure stream. The original lower reservoir can still be seen alongside the access road. The original upper reservoir also still exists, but was roofed over and converted into a treated water storage reservoir at the time of construction of the old Water Treatment Works in the 1950s.

By the late 1870s the Ramsey Water Works Company, finding the storage they had available insufficient to maintain supplies to the town during the summer visiting seasons, decided to promote the construction of a new dam across the valley just upstream of their two existing reservoirs, forming a new reservoir holding about 70,000 cubic metres.

Construction of the new dam commenced in the summer of 1881 and was completed in December 1884. The dam is an earth embankment dam of typical design for the period. The base of the valley beneath the dam site is filled with deep deposits of glacial drift material overlying the bed rock.

The reservoir has not been used as a raw water resource since 2005 following the closure of the old treatment works and is now used solely for recreational purposes. It remains under the ownership of Manx Utilities. 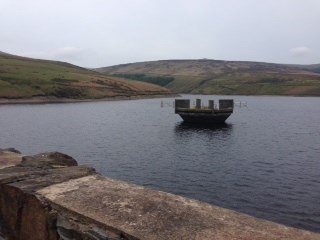 Sulby Reservoir is the largest and newest reservoir on the Island. Completed in 1982, the reservoir was formed by the construction of a rock fill embankment dam across the Sulby River just downstream of its confluence with the Druidale stream.

The reservoir is used to supply water and to generate hydroelectric power from a hydro turbine located about 1.6 kilometres downstream of the dam. In addition to this; in 2013 an energy recovery system was installed at Sulby Water Treatment Works to generate hydroelectric power from incoming raw water. The water then passes through the treatment works and onto our customers. 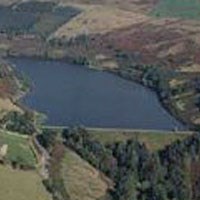 The construction of West Baldwin Reservoir began in 1900 by Douglas Corporation Water Works Department and was completed in 1904.

The reservoir is 6 miles north of Douglas, and a railway was required to transport materials to build the reservoir. Construction of the railway line commenced in October 1900 from Sir George's Bridge in Abbeylands up to the site of the dam. Timber bridges had to be made, as the River Glass had to be crossed nine times. The Reservoir was formed by the construction of an earth fill embankment dam across the valley of the River Glass. Half a million tons of earth had to be moved to build the reservoir.

The dam has a vertical puddle clay core supported by zoned earth fill shoulders. The upper part of the upstream face is faced in dry rubble pitching about 60 centimetres thick. The crest and downstream face are grassed. The maximum depth of water impounded is just over 21 metres.

The reservoir, sometimes known locally as Injebreck Reservoir, is located on the site of 3 properties, the remains of which can be seen when the reservoir is near empty.

The catchment area is moorland lying on Manx slates.

Block Eary Reservoir was constructed during the Second World War and completed in 1945.

The catchment area is on the steep slopes of Snaefell 4.12 square kilometres and the Block Eary stream flows west into the Sulby River.

The outlet pipework was modified in the 1980s to provide the headrace for a hydropower station situated at the confluence of the Block Eary stream and the Sulby River. The reservoir is now used principally as a source of water for hydroelectric power generation, in conjunction with Sulby Reservoir.