Construction works underway by Manx Utilities have revealed remains of an old stone quayside dating back to at least the 1700s. The works, to replace and install modern water main and sewerage infrastructure, are part of Manx Utilities’ maintenance and upgrading programme, and have seen short lengths of the Promenade and East Quay closed for several weeks at a time whilst deep excavations are undertaken.

The project has been several years in the planning, during which time Manx Utilities has consulted with interested stakeholders and designed the works to minimise disruption as much as possible.  Surveys and test holes have previously been carried out to understand the nature of the ground into which the new services are being placed, in particular identifying the types of potential difficulties that might be faced. Because of the historical interest – East Quay itself is around 200 years old – Manx National Heritage has been a key stakeholder from the start, offering advice and access to historical information.

MNH archaeologist and Inspector of Ancient Monuments Andy Johnson explained, “Old maps from the 18th century show a very different scene in Peel harbour to what we see today.  We were aware that the modern public quayside was built in front of a series of private quays and docks, and that the ground behind was filled in to create more space for new warehouses, merchants’ houses, workshops and other industrial buildings.  While some of these still stand, the improvements saw the demolition of other buildings to ground level.  Manx Utilities’ underground radar surveys and test-pits helped to identify where these structures still survive, and the course of the new pipework has been threaded through so as to minimise damage as much as possible.  The most substantial structures are the old harbour walls, and one of these protruded so far into the excavation that it couldn’t be avoided – but it meant we got to see it for the first time in about two centuries!”

The old harbour walls are built of the red sandstone found at the end of the bay, unlike the more recent harbour works which are for the most part constructed from rock from the many quarries on Peel Hill.  One of these older seawalls defined land attached to No 31 Castle Street, and continued westward below the roadway along a line extending out from the south side of the alleyway between No 31 and the Leece Museum, before turning south to meet the corner of the Jade Restaurant by the entrance to Keown’s Lane.

Continued Mr Johnson, “From this old quayside, a ramp would have led downwards into the storage vaults below No 31, where part of the restaurant is today.  I’m quite sure the partially sunken entrance was one of the reasons so many people are convinced that Peel has a maze of underground smugglers’ tunnels.  We know that Castle Street was once home to several of Peel’s most powerful merchants, some of whom lived above or adjacent to a range of warehouses, vaults and yards where the source of their wealth would be stored after being unloaded from their ships, on the quaysides.”

Easy access to the shore was essential to successful merchants in the period, and similar arrangements existed in Castletown where MNH has revealed George Quayle’s private dock which was built in the same era.  Another famous merchant of the time was Sir George Moore, Speaker of the House of Keys, who traded so successfully – allegedly both inside and outside of the law – that, whilst he lived in a fine house at Ballamoore near Patrick, he also owned some of the best land and buildings at the mouth of Peel harbour and in Douglas.

MNH and Manx Utilities are noting any features that appear in the course of construction works and relating them to early maps of the harbour area.  Some of the structures may be more recent, and MNH is ready to respond as required.  Concluded Mr Johnson, “I shall be very interested to see if any evidence of the temporary WW1 railway track appears once the project approaches Station Place – along the rest of the quay the new pipes are too far away from the sea wall – this was the track that enabled supplies brought into Peel by ship to be transferred down to the internment camp at Knockaloe.  And then we may see if there are any remains of the seawall at Station Place itself which gives its name to the Creek.  It has been extremely beneficial to work so closely with Manx Utilities from the very beginning of the scheme so that the recording work we do can happen alongside and cause minimum delay to the construction process.”

Manx Utilities’ Project Sponsor Bob Stimpson added “We are very keen to record any historical features we expose during our excavations as they are unlikely to be revealed again to this extent for maybe three or four generations – I have a keen personal interest in the history of the town and we have worked closely with MNH to identify and record features like the deep arches below the quay by the Harbour Master’s Office”.

Manx Utilities’ main contractors Eric Wright Water and local ground-workers Paul Carey and Sons are making good progress and have now moved clear of this end of Keown’s Lane. The lane runs along what was the harbour edge in the 1820’s. At that time the residents of homes in Castle Street could draw their fishing boats up to the backs of their properties.

The old MNH watercolour by William Latham dates from 1815 and was painted from a position near to the modern House of Manannan entrance. It shows the old harbour wall and the foreground building in the painting is close to where the modern Filbey’s restaurant stands today. 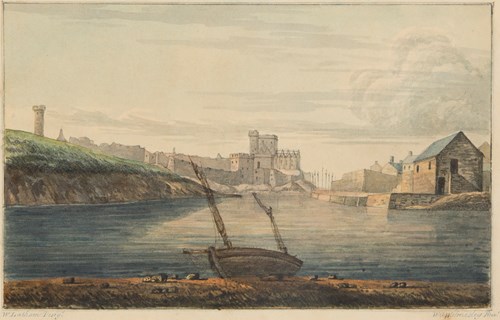