In September we undertook a customer survey, carried out on our behalf by Island Global Research (IGR). IGR asked questions about our smart metering programme, which is due to start in early 2021, and its proposed benefits. The survey also enquired about customers’ wider views on Manx Utilities and the environment.

We would like to thank everyone that took the time to participate in the survey: a total of 1,090 residents responded. The main communications activity for the roll-out is yet to commence, so the results are a benchmark; another survey will be conducted at a later date to test how effective customer engagement has been and whether or not attitudes have changed during that time. Around half of those who took part were aware of the smart metering programme, although only one in ten people believe they know a lot about it.

There is currently little knowledge of the proposed benefits that the programme will bring about, so building better recognition and understanding of benefits is something that has been built into our customer communication plan.

The most widely acknowledged and accepted benefit is improving the understanding of energy consumption, while the major concern, expressed by more than half of respondents, is that the cost of the programme will lead to an increase in the price of electricity as a direct consequence. There were a number of other concerns expressed in the survey including relationships with vulnerable customers, and the role that we are to play in the climate change mitigation effort. The process of recognising and addressing all these concerns, and reassuring customers, is firmly embedded in our engagement strategy and we will be communicating much more about the details of the programme over the coming months.

The survey also asked about environmental awareness, attitudes towards energy consumption and its contribution towards climate change:

With regard to people’s attitudes towards Manx Utilities:

Information on the benefits of smart metering, the report and an infographic of topline results from the survey can be found on the Smart Metering tab. 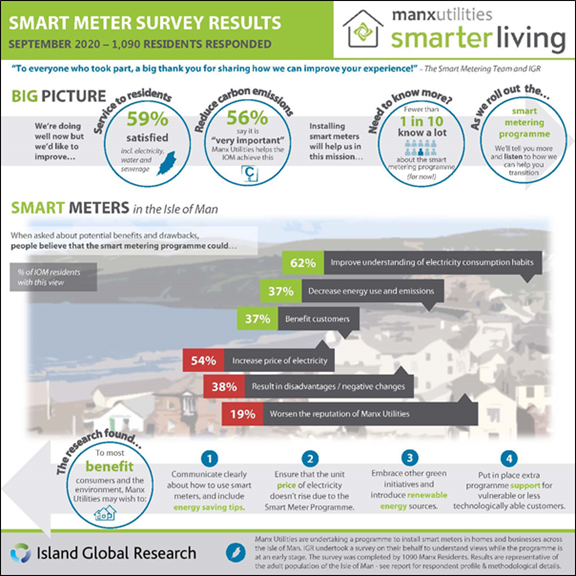